Advantages and Disadvantages of the SmartThings Hub

Why did Google choose Nest as its Smart Home brand?

Pros and Cons of Google Home

Alexa vs Siri vs Google Assistant. Which is The Best Digital Assistant?

All You Need To Know About The Smart Home Matter Protocol

What Are Google Max, Google Home, Nest Hub, and Nest Hub Max, Nest Mini, And What Can They Do?

Pros and Cons of A Smart Hub

Apple Homekit and Home App. What Are They and How Do They Work?

The Best Smart Thermostats of 2021

All You Need To Know About Homekit Smart Hubs

The Best Smart Devices of 2021

Ultimate Guide – How to Make a Smart Home

How to Make a Smart Home – Honeywell Smart Devices

How to Make a Meross Smart Home?

How to Make a SmartThings Smart Home

How to Make a Hubitat Smart Home?

How to Make A Smart Home – Yale Smart Devices

How to Make A Smart Home – SwitchBot Smart Devices

How to Make A Smart Home – Fibaro Smart Devices

How to Make A Smart Home – Eufy Smart Devices

How to Make a Smart Home Using Wyze Technologies

How to Make A Smart Home Using Abode Technologies

How to Make a Smart Home – Eve Homekit Technologies

How to Make a Smart Home – Aqara Technologies

How to Make a Smart Home – Ecobee Smart Devices

How to Build a Philips Hue Smart Home

How to Build a Sonos Smart Home

How to Build a Control4 Smart Home

How to Build a Lutron Smart Home

How to Build a Ring Smart Home

How To Set-Up An Apple Homekit Smart Home

How to Set-up an Alexa Smart Home

Samsung SmartThings Smart Home Automation: What is it?

7 Tips On How To Become A Successful Smart Home Installer

How to Start a Smart Home Installation Service?

What’s the Story With Smart Doorbells?

Amazon Alexa Vs Google Home – What Type of Smart Speaker Should You Purchase?

What is a Smart Home Assistant?

10 Things You Need to Know About Smart Light Bulbs 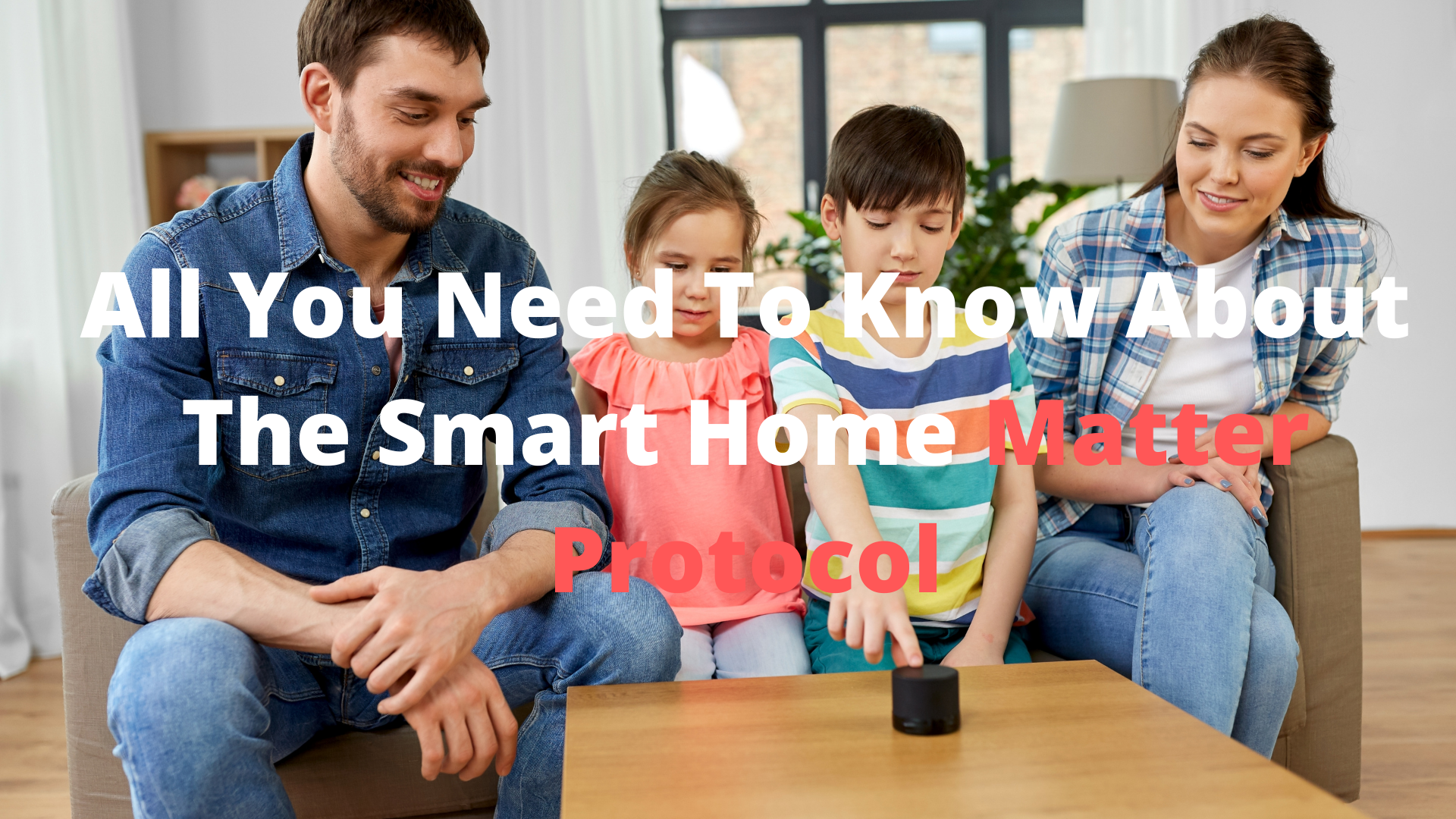 In recent years, the home automation industry has been going through extensive developments. Back in December of 2019, the biggest one yet happened. The ambitious project CHIP was born, and ever since, smart home enthusiasts have been talking about what it could mean to the new age of smart devices.

While the smart home industry is still trying to figure out CHIP, a new or rather improved version of the same project has just come up named Matter Protocol.

What is Matter Protocol?

Previously named Project Connected Home over IP (project CHIP), Matter is an all-new and advanced interoperability protocol developed and launched by automation powerhouses like Google, Apple, Samsung, Amazon, among many others.

Anyone out there who has automated their home or is planning to agrees that smart home devices should work together seamlessly. When going to purchase a smart thermostat of your choice, you shouldn’t have to worry about its compatibility with certain sensors.

The same thing applies to all the other smart home devices. Every homeowner shares the dream that someday they’ll be able to automate their homes with smart devices based on their quality and functionality but not compatibility.

If you’re one of those that share this dream, Matter protocol is for you. The main aim of the Matter protocol is to create standard data models for smart gadgets from different platforms that will work seamlessly without a specific ecosystem.

In simple terms, Matter will provide a certification for these smart home devices. The devices that bear this certification will be able to work together without the need for third-party bridges.

For example, with Matter protocol, you won’t need to wonder if a Ring Doorbell is Samsung SmartThings compatible. This is because a Matter-certified doorbell will work seamlessly with a Matter-certified alarm system or motion detector.

Will Matter Protocol Integrate With Thread?

For those who are not familiar with Thread, it is a radio protocol developed by Nest and came into use in 2014. Thread enables smart home devices to connect to the internet and connect with other compatible devices.

Matter protocol developers have chosen Thread and Wi-Fi as the main protocols that Matter-certified smart home devices can connect over.

What Does the Introduction of Matter Protocol Mean for Zigbee and Z-Wave?

Since the home automation industry began, there have not been other connectivity standards commonly used among smart devices like Z-Wave and Zigbee. So with the introduction of Matter protocol, most homeowners wonder what this means for the Z-Wave or Zigbee enabled devices.

It’s important to note that these wireless protocols are used in a wide range of smart home devices in the market today. They are incorporated in all kinds of devices, from high-end automation setups to simple devices such as sensors and motion detectors.

What appeals to most homeowners about Z-Wave and Zigbee protocols is that it’s not as power-intensive as Wi-Fi or limited to a short-range like Bluetooth.

Since Matter-certified will primarily connect over Thread and Wi-Fi protocols, Z-Wave and Zigbee will not be involved in this project. However, since Matter-certified smart devices won’t be hitting the market until the end of this year, Zigbee and Z-Wave devices are likely to keep working.

In this case, if you’re looking to purchase any new smart devices this year and it can’t wait for the arrival of the Matter-certified devices, you can still go ahead. These devices will serve you for a few years before you can upgrade to the latest and more inclusive ones.

However, the Matter protocol developers have assured buyers that they will keep supporting bridges and protocols from the older smart home devices.

This is not enough information to go on, but it gives some hope for homeowners who use Zigbee and Z-Wave smart devices. They might not end up replacing these smart devices after all.

On the other hand, the Z-Wave developers have been working with Silicon Labs on developing even better devices. The Z-Wave Long Range devices available for both DIY and security will feature some much-needed improvements.

As the name suggests, it’s reported that these devices will work in longer ranges, even better than Matter-certified products will.

What Does the Introduction of Matter Protocol Mean for Bluetooth?

Another thing that has been confusing homeowners as we enter into the era of Matter protocol is what is bound to happen to Bluetooth-powered smart devices. Since Bluetooth joined the cluster of radio protocols, recently one would think it has a future in the smart home industry.

Well, Bluetooth as a wireless protocol isn’t going away anytime soon, even with the impending developments. There are so many smart home devices in the market today that rely on Bluetooth for connectivity.

This makes it a very valuable wireless protocol in the home automation industry now and even in the future. If you own any smart home devices that rely on Bluetooth, you don’t need to get rid of them yet.

They’ll keep on working for the time being as we wait to see what Matter protocol has in store for home automation. Bluetooth isn’t a complicated wireless protocol compared to Wi-Fi.

That’s why it’s incorporated in many devices, from computers, smartphones to televisions and many audio gadgets. It has not been announced yet but maybe with time Bluetooth could be incorporated in the all-new project CHIP under Mater protocol.

What Happens to the Existing Smart Home Products?

This question entirely depends on the manufacturer of the devices. For example, companies like Philips Hue are updating all their products to be Matter-compliant as soon as possible. Also, some companies have not provided any updates to their customers about the new developments.

If you have the old smart home devices, it’s likely they won’t stop working right away. However, you’ll experience loss of support and overall depreciation over time.

Whether you support the Matter protocol project or not, you have to admit that it has the best interests of the automation industry. If you’d like to get better and less complex functionality from smart gadgets, Matter protocol is the way to go.

Previous: Alexa Cars, New Smart Home Standard and More….
Next: Alexa vs Siri vs Google Assistant. Which is The Best Digital Assistant?

This site uses Akismet to reduce spam. Learn how your comment data is processed.